To many players and coaches, the serve is the most important shot of the game.  It's the only shot where you have full control without your opponent pressuring you.  Having a good serve is crucial to setting up free and easy points, and holding your serve game.  When matches are tight, a good serve can really put pressure on the opponent and give you the edge to win.

The slice serve is usually used to in the deuce court for right handed players and in the ad court for left handed players.  This serve uses sidespin to project the ball to the far side of the service box so that the ball bounces into the doubles alley.  This strategy forces the opponent to move outside the court for the return, and gives you the entire court to hit your next shot.

The topspin "kick" serve is usually used for the second serve.  The ball is hit higher over the net with topspin, and the topspin allows the ball to drop into the service box.  This ball path is safer because there is less chance that the ball will hit the net since it crosses the net at a higher point.  A good topspin serve will bounce high with lots of spin, and a great topspin serve will even slightly change direction after the bounce.

The serve stance that a player chooses to use is personal preference.  The platform stance offers better balance and rhythm.  The pinpoint stance gives a bit more power.  However, the best servers in the world have almost always had a platform stance, and I recommend platform stances to all tennis players.  Regardless of the stance you use, you should push off of both feet equally for good balance during your serve.

This quick video shows the differences between the platform and pinpoint serve stances.  The second shows the importance of leg drive into the serve.

Momentum in the Serve

Momentum and fluidity are important to the serve.  These tips can help you further understand how the body parts move with momentum to create powerful and fluid serves.

Where the Ball Toss Should Land on Flat and Kick Serves 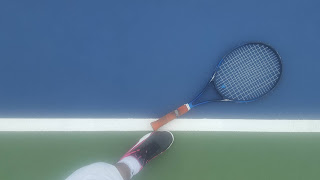 The flat serve toss should land on the strings ahead of the front foot. 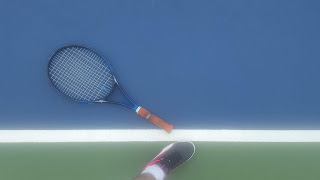 The kick serve toss should land to ahead of the front foot but to the side of the heel.


How the Wrist/Forearm should Rotate on Different Serves (Tentative Draft)

This is just to show how to curl around the ball or snap the ball with the wrist at the moment of contact with the ball on your strings.  As you feel the ball on your strings, you will move the wrist one of these ways to create spin or power.  Serve motions are from the ground up after the ball is tossed and after you are in the trophy position - starting with the legs extending, then the racket arm swinging up to the ball, then cocked/lagged wrist through contact with these wrist motions here, then finishing the momentum and the shot (as demonstrated above).  I could not find enough info on this important moment in the serve, so I used an old video until I am able to make an updated and better instruction for this often overlooked but crucial motion.

Having a ritual before your serve helps your muscle memory and concentration.  If helps your body and mind become familiar with the process of serving and the situation, and creates a sense of comfort.  Some ideas for serve routines are bouncing the ball, rocking the body, light hop, tapping your clothes, or whatever creative personal ideas you have that you can do before you get in position and toss the ball.  You can also have a different routine for your first and second serve.  Practice pre-serve rituals and routines so that when under pressure, you can concentrate better and let the entire serve process flow naturally.  (Rituals can also be helpful for the return and between points or during breaks).